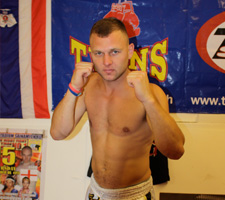 Dave has been training in Muay Thai since 2005. He is an experienced fighter and was the first fighter to fight for ThaiWorks Gym. He has fought his way to a ‘British title’ and then onto a 'EUROPEAN TITLE' and won, also competed in Canada for a world title and is still developing himself. Dave is a proven skillfull Thai boxer with many tough professional fights under his belt against some great opponents. He has always taken his training very seriously and just when you think he cant dig any deeper... He does!. Dave is in charge of the fighters and their progression and training whilst working with other instructors on the progress of everyone at Thaiworks.

His knowledge and experiences in Muay Thai are the reason he is the Head Fight Coach.

Dave is a conscientious instructor ready to help.